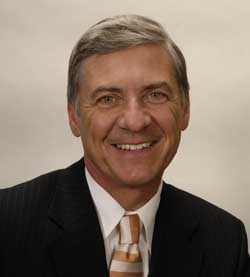 Bob Klein is the Founder of Dunelm USA (a/k/ the North American Foundation for the University of Durham, Inc.). He retired from its active leadership in 2017, after twenty-five years’ service as Chairman of the Board, President, and Treasurer. Bob continues to serve as an emeritus advisor to the current Board and officers. In 2010, Bob was honored as Durham's very first recipient of the University's Dunelmensis Award, which the University Senate now annually presents "to acknowledge the personal, exemplary and sustained contributions of an alumnus/a in facilitating the progress of Durham University."

Bob studied at the University of Durham in 1971-72 during his “junior year abroad” while an undergraduate student at the Massachusetts Institute of Technology (B.S. 1973). Bob resided in Grey College under the auspices of a program sponsored by the Institute for European Studies. He has especially fond memories of the many kind and welcoming persons he had the opportunity to meet throughout the University and the city while serving as the Treasurer of Durham University’s Rag Week. An avid singer-songwriter, some of Bob’s spare time also was spent performing his “American” music in several of the colleges and town pubs. Because of the law courses he took during his year at Durham, Bob decided to pursue a career in law upon his return to the United States. He graduated from the Columbia University School of Law in 1976.

Bob is a name principal in the law firm of Wharton Levin Ehrmantraut & Klein, P.A., which is headquartered in Annapolis, Maryland. His law practice focuses on the defense of products liability, mass tort and commercial matters. He also is a trained mediator, with emphasis on the mediation of complex matters. His experience includes serving as national coordinating counsel in toxic tort, product defect and construction defect cases filed in nearly every State in the U.S.A., and abroad. Bob has published and lectured extensively on product liability law and civil practice in the United States and abroad. His several publications include a well-respected two-volume treatise on civil procedure and trial practice.

Bob and his wife, Trisha, honeymooned in Durham in 1978 (when for the first time they had the pleasure of dining at Grey College’s high table as the guest of legendary Master Sid Holgate). They are blessed with a daughter and identical twin sons who have grown into fine adults.

A member of ASCAP, the Nashville Songwriters Association International, and other music industry organizations, Bob is an award-winning singer-songwriter and composer whose original music has been performed on radio and TV, in film, musical theater, and on countless stages across the USA, Europe and South America by Bob and by other recording artists with whom he has co-written popular songs in multiple genres.