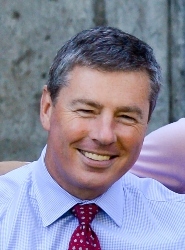 Christian graduated from Hatfield College in 1987. Time at Durham was spent playing soccer for the University 1st XI for four years (except when dropped controversially for part of his second year), socializing too much, and learning how to teach. Every summer, Christian was able to travel to the USA to work and after graduation, went to India for three months as part of a university-funded study. Further degrees were gained from Bath and Columbia. As wonderful as the experiences at those universities were, the defining educational and developmental experience occurred at Durham, where so many life-long friends were made.

Christian has taught and led at schools in London, Kenya, Oxford, Washington, DC, Connecticut, and presently in Tacoma, Washington. Christian is now Head of Annie Wright Schools, a Pre-School through 12th grade International Baccalaureate day and boarding school founded in 1884. Prior to this, he was Headmaster of Fairfield Country Day in Fairfield, Connecticut. Christian serves on the Board of Trustees for the Northwest Association of Independent Schools and the Museum of Glass in Tacoma.

Christian is married to Lisa, and they have two children, Lexy and Matthew. Lisa and Christian met in Nairobi where Lisa was a journalist on assignment from the US. Lisa has degrees from Washington University in St. Louis and Columbia Journalism School. She is now Director of Communications at Annie Wright. They are all addicted skiers, and Christian still plays as much sport as family, work commitments and his increasingly decrepit body will allow. The family are deeply involved in various organizations in the Pacific Northwest - the YWCA, the College Success Foundation, and the Museum of Glass, to name but a few.