Jenny attended Durham University as an undergraduate between 1996 and 1999 and qualified with a B.A. (Hons) in Geography. During this time she served as President of the Durham University Geographical Society. She was also on the university swimming team and college hockey team.

Inspired by courses at Durham on international development and Southeast Asia, she spent a gap year volunteering in India then went on to study at Royal Holloway, University of London for an M.A. in the Geography of Third World Development (2000-01) with field research carried out in Kolkata, India. She later returned to Royal Holloway for her PhD in Geography (2007-2010) and conducted further fieldwork in Kolkata.

Jenny’s professional life is rooted in her love of geography. She spent ten years at the Royal Geographical Society in London followed by two years at the American Association of Geographers in Washington DC. In these organisations she held a variety of roles which involved working with geography departments and academic researchers, university students and school teachers, as well as on outreach projects to demonstrate the relevance of geography to the wider public.

In January 2017 she moved to the American Geophysical Union in Washington DC, which is the association for earth and space sciences. She is Assistant Director in the Publications Department which produces 20 scholarly journals as well as a book series. One of her responsibilities is communicating the content of scientific articles and books to wider audiences through plain language interpretations.

Jenny is originally from Oldham in northwest England and misses her beloved hills and good pies. As well as living in dozens of places in the UK, she has also lived in the Netherlands, India and Sierra Leone, and travelled widely.

She is married to Alessandro, originally from Sicily, and they have two dogs, Sam and Sally, who were adopted in Sierra Leone. Much of their spare time is spent exploring city and countryside together on foot.

Jenny maintains her interest in India which began over 15 years ago. She is a Trustee for the Friends of Calcutta Cathedral Relief Service which raises funds in the UK for work in India, and is responsible for their website.

Jenny also plays the trombone and, remaining faithful to her northern roots, is a member of Rockville Brass Band, a British-style brass band in Maryland. When she feels energetic, Jenny runs and swims; equally she enjoys relaxing on the sofa with a good book or film. 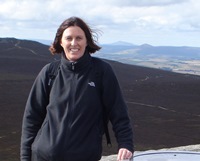