Stephen Israel attended Van Mildert College, graduating in 1984 with a degree in Physics. While at Durham, he was a member of DSU Council and Senate, a committee member of the DU Industrial Society - as well as assistant director of DUCK 82, where he was the biggest seller of DUCK rag mags around the nation.

After Durham, Stephen got an MBA from Cornell University, and worked for management consultants Booz• Allen & Hamilton and subsequently strategic planning roles at Warner Bros. and Turner Broadcasting.

Stephen is now an independent film producer based in Los Angeles, CA - his credits span twenty years, and about twenty feature films, including the cult classic Swimming With Sharks which launched Kevin Spacey’s film career, and more recently the teen comedy GBF.

He lives in Laurel Canyon with his two Hungarian Vizslas, Boudicca and Imogen. 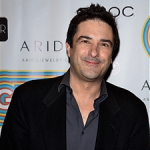